Milos Veljkovic on personal records, responsibility, and the Augsburg game

One statistic underlines Milos Veljkovic’ influence this season: Werder have not lost a game when 25-year-old centre back has been in the starting XI. “Of course, it is a nice statistic and I hope it continues,” said Veljkovic on Wednesday. “But it’s for other people to decide how much of that is because of me.”

Saturday saw Veljkovic complete his first full 90 minutes since returning from injury. The defender said that while the game was tough for him, he is feeling good. “I think I was able to keep up until the end. Aside from a few muscle aches, I dealt with the game well.” 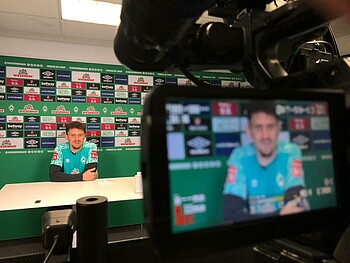 Veljkovic’s return builds anticipation for the upcoming games. Regardless of any personal record this season, the 25-year-old’s aims never change. “My goals are always the same – to be in the starting XI every week. It was the same when I joined Bremen as a 20-year-old.” And Veljkovic says he would have the same aim even if Werder had lost every game that he’d started. Taking responsibility is an everyday task, said Veljkovic, so that the younger players don’t feel excluded.

“During the week we had an intense training session with a lot of duels,” said the defender. Veljkovic highlighted the importance of physicality ahead of the upcoming clash with FC Augsburg on Saturday (15:30 CET). “We have to take the initiative and play an aggressive game,” said the number 13. With this in mind, Werder and Veljkovic’s impressive record may continue.

Baumann: “We completely understand the decision”

“We were at our best this evening”

27.02.2021 / First Team
Your web browser ist outdated.
The web browser you are using is no longer supported.
Please download one of these free and up to date browsers.
Why should I use an up to date web browser?