Werder come from behind to beat Frankfurt!

Goals from Gebre Selassie and Sargent give SVW 2-1 win

Werder fought back from behind and secured a massive three points on Friday evening as they defeated Champions League-chasing Eintracht Frankfurt 2-1. A lightning start to the second half saw Theodor Gebre Selassie level the scores after just two minutes (47’) before Josh Sargent remained cool to slot home the winner in the 67th minute. André Silva had given the visitors an early lead with his 9th minute header. Prior to the match, Frankfurt had taken a total of 25 points from the last 27 available. The result sees the Green-Whites points tally increase to 26 and widens the gap to the drop zone to 8 points.

Line-up and formation: Coach Florian Kohfeldt made one change to the side that lost in Sinsheim last weekend. Romano Schmid was rotated in to replace Leonardo Bittencourt, who joined Davie Selke and Niclas Füllkrug on the bench. 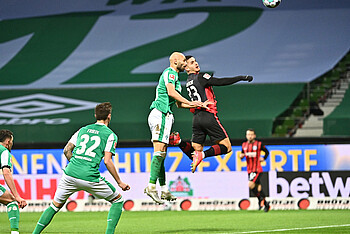 André Silva rose highest to give the Eagles the lead (nordphoto).

9th minute: Goal for Frankfurt. Eintracht push forward and win a corner, which is taken short and laid off for Filip Kostic to whip the ball into the box. André Silva rises highest and directs a powerful header past Pavlenka to give the visitors an early lead.

18th minute: Silva is hunting for a second as he connects with a pass and shoots from close range, but it’s safely collected by Jiri Pavlenka.

19th minute: André Silva is again causing the Werder defence problems as he wins a free kick in a dangerous area on the edge of the box. Filip Kostic steps up to take it but his curling drive flies wide of the target.

26th minute: Romano Schmid pushes forward and is brought down on the edge of the Frankfurt area. It falls to Milot Rashica to take it and he gets a great connection on it, but it’s straight at the goalkeeper.

29th minute: Josh Sargent has the ball in the net for Werder, but his celebrations are brought to a premature end by the linesman’s flag. Getting close to an equaliser!

35th minute: Milot Rashica wins himself space with a great touch in the Frankfurt box, before cutting inside and slamming an effort off the crossbar! So close!

40th minute: Maxi Eggestein finds Romano Schmid with a good pass, and the Austrian chips an effort in on goal but it’s blocked by a combination of Hasebe and Trapp.

Werder come from behind to claim the win! 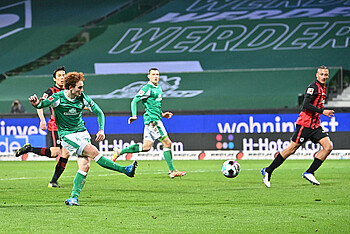 Josh Sargent kept cool to score what would be Werder’s winner (nordphoto).

47th minute: GOAL FOR WERDER! Milot Rashica carries the ball forward before playing a perfect pass through to the advancing Theodor Gebre Selassie, who beats his man before slotting home with a great finish! All-square at the wohninvest WESERSTADION!

62nd minute: GOAL FOR WERDER! Josh Sargent times his run to perfection and receives a great pass through. He faces Trapp one-on-one and keeps his cool to drill the ball into the bottom left corner with a great finish! Werder lead!

67th minute: Josh Sargent receives another great pass in the box from Rashica and strikes it first time. This time Frankfurt’s keeper is able to save brilliantly, however.

70th minute: Sargent is again involved as he beats his man and slides the ball across to Romano Schmid on the left, who fires it home into the roof of the net. The linesman’s flag is once again raised though and the young Austrian’s effort won’t count.

75th minute: Kostic carries the ball forward and tries a stinging drive from 20 metres out. Pavlenka is equal to it and parries away to safety.

Conclusion: The Green-Whites seemed to give the visitors too much respect in the early stages of the game as they let Adi Hütter’s team control the tempo. Frankfurt, who have been in frightening form so far this year, seemed set to continue their incredible streak as they struck early through André Silva’s brilliant header in the 9th minute. However, this goal shook Werder into action and Florian Kohfeldt’s team began to play much more cohesively, with Milot Rashica hitting the bar (35’) shortly after Josh Sargent had a goal disallowed. SVW made this good play count shortly after half time as Theodor Gebre Selassie received a fine pass from Rashica and finished past Kevin Trapp to level the scores (47’). Josh Sargent completed the comeback a quarter of an hour later as he beat Trapp in a one-on-one (62’). Werder were then able to close out the rest of the game to secure a famous victory over the most in-form team in the Bundesliga!