Play at a higher tempo

With the international break now over, Werder are looking to secure their place in mid-table. Aside from Milos Veljkovic, all players who were away with their countries have returned fully fit. SVW made good use of the break to work on things in training. “A lot of the ideas we wanted to introduce during the international break worked well from what I saw in training,” said Florian Kohfeldt at the pre-match press conference ahead of Sunday’s game away at VfB Stuttgart (15:30 CEST). The Werder coach praised his side’s development, but wants them to improve on two things: “We set aside two training sessions to work on playing at a higher tempo and getting higher up the pitch.”

The squad: Josh Sargent is banned for the game in Stuttgart after picking up his fifth yellow card of the season last time out. Milos Veljkovic had to leave international duty with a thigh problem so it’s unlikely he will feature in the south of Germany. A definite absentee is Nick Woltemade, who suffered a partial tear to his LCL in a non-contact incident in training and will be out for between six to eight weeks. Aside from these three players, Florian Kohfeldt should have a full squad to choose from.

“Stuttgart are a very versatile side” 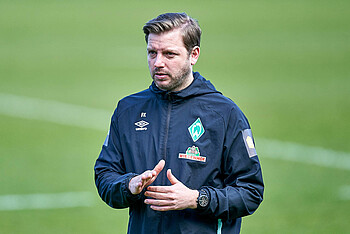 Florian Kohfeldt expects Stuttgart to be able to mix things up (Photo: nordphoto).

The head coach on the game: Florian Kohfeldt was happy with the training sessions in the run-up to this game: “We’ve trained well and the team has been very focused.” While Stuttgart are without two of their attackers in Silas Wamangituka (torn ACL) and Nicolás González (thigh), Werder’s head coach has almost a full squad at his disposal. VfB will need to replace those two players, but their style of play will not change: “They will still play with the same confidence and bravery and try to combine at pace.” A win for Werder could help secure a place in mid-table and Kohfeldt wants his side to show they have developed after the defeat in the reverse fixture.

The last meeting: A clinical Stuttgart side won 2-1 the last time the sides met. After a foul by Chong on Endo, referee Willenborg pointed to the spot. Wamangituka gave Stuttgart the lead after 31 minutes. After a mix-up between Ömer Toprak and Jiri Pavlenka, Wamangituka was clean through with an open goal and made it 2-0 in the 91st minute. There was still time for a consolation goal from Davie Selke, though (93’). 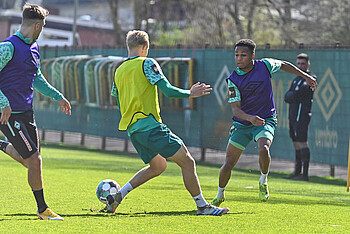 Kohfeldt wants his side to play at a higher tempo (Photo: nordphoto).

Stuttgart strong at home: VfB’s last game saw them lose 4-0 away at reigning champions FC Bayern, despite having a man advantage for a large part of the match. Nevertheless, they have been good at home in recent times. The Swabians are unbeaten in five Bundesliga home games (W3, D2) and have even won back-to-back home matches for the first time this season. Their last defeat at the Mercedes-Benz Arena came on matchday 14 to Leipzig (1-0).

Get back to winning ways: After two defeats in a row, Werder want to get back to picking up points. Bremen’s recent record against Stuttgart, however, isn’t the best. SVW have lost three of their last four Bundesliga matches versus VfB (D1). Werder only have one point fewer than they did at the end of last season, when they finished 16th and had to play the relegation play-off (31 points), meaning a draw against the Swabians would equal this return already. “We need to be awake but can’t start to panic if we do lose,” stressed Kohfeldt.