Preview of the home game vs. the Zerofivers

Werder have a huge game on Wednesday as part of the Bundesliga’s midweek matchday. SVW will take on 1. FSV Mainz 05, who are just below Bremen in the table in 14th – two points behind but having played a game fewer. “We have to accept the fight and throw everything at Mainz. This won’t and shouldn’t be a quiet game,” said coach Florian Kohfeldt at the pre-match press conference. The “six-pointer” could be decisive for the rest of the season, while “a win would be a huge step in the right direction”.

The squad: Leonardo Bittencourt had to come off injured before half time against Dortmund. A decision will be made on his availability after tests on Tuesday. Christian Groß definitely won’t be involved after picking up five yellow cards. Niclas Füllkrug, who wasn’t in the squad against BVB, is fit and available for Kohfeldt. Philipp Bargfrede will also make the squad again. Long-term absentees Ömer Toprak (muscle strain) and Nick Woltemade (partial LCL tear) remain out.

“There’s also a lot of pressure on Mainz” 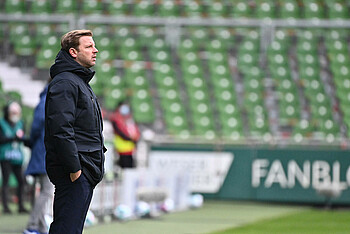 The head coach on the game: Florian Kohfeldt was clearly not happy after the 4-1 away defeat to Borussia Dortmund, especially after conceding three goals inside nine minutes. Nevertheless, the boss is looking ahead full of optimism: “We have to put the last few games behind us. I’m expecting us to play with confidence and passion tomorrow and then we will be successful.” Werder’s losing streak urgently needs to be stopped in the game against Mainz. The Zerofivers, meanwhile, have picked up 22 points in 14 league games since changing coach and have fought their way out of the drop zone as a result. “Their development under Bo Svensson has been really impressive. Their long balls and high pressing make it tough for opponents. I’m expecting a really aggressive Mainz side tomorrow,” commented Kohfeldt. “We’re all up for it and full of energy. I’m looking forward to it because I like games that are important. We can achieve a lot tomorrow,” added the 38-year-old.

The last meeting: Werder picked up a deserved 1-0 win at Mainz on 19th December. SVW took control of proceedings early on, although Kohfeldt’s side couldn’t take their chances after forcing the Zerofivers into several mistakes. After a more even second half, Eren Dinkci came off the bench after 86 minutes for his Bundesliga debut. He headed home the winner in the 90th minute to secure all three points in a fairytale story.

Philipp Bargfrede will be in the squad again (Photo: nordphoto).

Mainz’s brilliant Rückrunde: The away side can boast the second-longest unbeaten streak in the Bundesliga right now, having not lost any of their last five league games. On top of that, they have picked up 21 points from 11 games in the second half of the season, their best ever return in the top flight. Overall, they are fifth in the Rückrunde table and haven’t been beaten in their last five games on the road (W3, D2).

Good in six-pointers: Werder are currently on a five-game losing run in the Bundesliga, which is the longest streak in the division and the joint-longest in the club’s top-flight history (most recently in January/February 2020). However, in so-called six-pointers against other sides in a relegation battle, Bremen have been strong this season, only losing one of the eight clashes. Conversely, Mainz have only recorded one win in these fixtures (vs. Köln on MD28).