“Taking that last step to the final in Berlin!”

Views on the quarter-final win in Regensburg

SV Werder reached the semi-finals of the DFB-Pokal for the third time in six years on Wednesday evening. Head coach Florian Kohfeldt watched his side beat second tier Jahn Regensburg, though he acknowledged things got “tense” in the final ten minutes. “It was our own fault that it got so close at the end,” said Marco Friedl as he assessed the team’s performance. However, the Werder defence were able to keep their perfect defensive record in the competition as Yuya Osako’s goal carried SVW to a 1-0 victory. “At the end of the day, we’re semi-finalists! That’s the only thing that matters for us. It’s a great result,” beamed Kohfeldt. 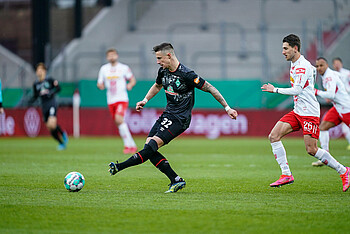 Marco Friedl was self-critical of Werder’s performance despite the win (nordphoto).

Marco Friedl: “We had to fight hard for 90 minutes today, but we were expecting a tough game. It’s always going to be tense at the end if you’re leading by such a narrow margin. We knew that we hadn’t given enough at half time. We didn’t have the game under control, didn’t create enough chances for ourselves, and we weren’t aggressive enough. We were better after the break and Yuya Osako scored an outstanding goal. We created a lot more after the break, but it was our own fault that it got so close at the end.”

Niklas Moisander: “It was a tough game for us tonight. Although we had a good phase, we didn’t give enough overall tonight. We weren’t focused enough in the first half, but we improved a lot after the break and created many more chances. After the goal, we should have got a second; that would have made things easier from our point of view. We didn’t kill off the game and they made life difficult for us.”

Florian Kohfeldt: “We had good control of the game and didn’t allow them many counter attacks, but at the same time we struggled to create much for ourselves. We changed our approach at the break so that we weren’t focusing so much on going through the middle, and we brought more depth in the way we were playing. We had a good opportunity with Niklas Moisander, but then Marco Friedl played a dream pass to Yuya Osako and he scores a beautiful goal. We had to kill off the game earlier and the last ten minutes were very tense. But we’re semi-finalists and that the only thing that matters for us. Now we’re looking forward to the game against Leipzig and hopefully we can take that last step to the final in Berlin!”

On reaching the semi-finals: 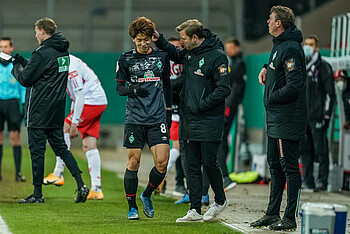 Marco Friedl: "The DFB-Pokal is an important competition for us. We're very happy to be in the semi-finals. We're so close to the final in Berlin, but we also know how good a side Leipzig are."

Niklas Moisander: "We're happy to have reached the next round and to be in the semi-finals. We will be looking to beat Leipzig and reach the final. We believe in ourselves, even if it will be a tough game. Leipzig are a strong side, but after today, anything is possible."

Florian Kohfeldt: "This will be the third time that Maximilian Eggestein and myself have reached the semi-finals together. It would be nice if we could go all the way. We've accomplished a lot by reaching the semi-finals and want to continue on. That's why we're in this competition, to advance as far as possible."

On the next Bundesliga match:

Marco Friedl: “Even after a big win like this, our focus still has to be on the league. Picking up points has to be our number one priority. We haven’t managed to do that in the last few games so we need to get back on track.”

Florian Kohfeldt: “We’ve got two very tough opponents coming up in Leipzig and Dortmund but we have to be looking to pick up points. We still need more points to guarantee survival, but I’m sticking to my guns and saying that we will be able to do it. Both sides have players missing. We’ll probably be without Ludde, but we want to field the strongest possible team in both games.”