One step closer to Berlin!

Werder’s DFB-Pokal journey continues! The Green-Whites booked a place in the semi-finals of the cup after beating SSV Jahn Regensburg 1-0 in Bavaria thanks to a beautiful 52nd minute strike from Yuya Osako. Florian Kohfeldt’s team, who are yet to concede a goal in the competition this season, will face RB Leipzig in Bremen on 30th April with a place in the final at stake.

Line-up and formation: Head coach Florian Kohfeldt made three changes to the side that started the bitter 1-0 defeat against VfB Stuttgart last weekend. Ömer Toprak withdrew from the squad at short notice due to a back problem, so captain Niklas Moisander came into central defence to replace him. At the other end of the pitch, Josh Sargent made his return after sitting out the last Bundesliga match due to a yellow card suspension in place of Niclas Füllkrug, who broke his toe in training. Finally, Yuya Osako was brought in for Romano Schmid. 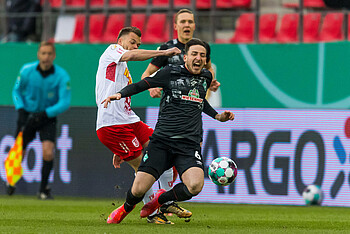 The first half in Regensburg saw lots of duels but few clear-cut chances (nordphoto).

17th minute: Maxi Eggestein sets Ludwig Augustinsson free down the left and he pulls it back from the goal line. Josh Sargent stretches to meet the ball but cannot quite connect.

26th minute: A first chance for Werder as the ball finds its way to Milot Rashica, who expertly dribbles past two defenders and unleashes an effort. However, it lacks power and Regensburg keeper Meyer is able to comfortably collect the ball.

35th minute: Ludwig Augustinsson chips the ball into the box and it appears to strike a Regensburg defender on the arm, but the referee is not convinced and waves play on.

41st minute: Albers is found by Saller in the middle and he hits a first-time shot that flies wide of the goal.

45th minute: Werder win a free kick on the edge of the box on the right-hand side. Kevin Möhwald stands over the ball and goes for goes, but his effort flies narrowly wide of the right post. The closest Florian Kohfeldt’s side have come so far!

Friedl and Osako combine to score beautiful winner for Werder! 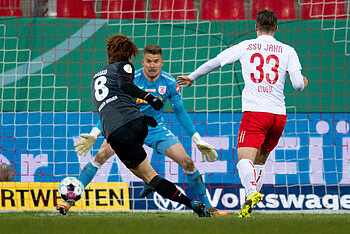 46th minute: A good start to the second half as Milot Rashica sends Meyer scrambling across his goal with a well-placed effort from distance. More of that please lads!

48th minute: The hosts immediately respond by going down the other end and only just missing out on the opener. Andreas Nielsen Albers finds space in the Werder box and hits a dipping shot that beats Pavlenka and only just goes over.

50th minute: The fast start to the second period continues, with captain Niklas Moisander the one to go close this time. The centre-back rises highest in the box and crashes a thunderous header off the post!

52nd minute: GOAL FOR WERDER! Marco Friedl picks up the ball in defence and loops a pinpoint pass from deep onto the chest of Yuya Osako. The Japan international’s first touch is superb and he fires home a volley to put the Green-Whites in the lead!

58th minute: Möhwald passes to Sargent in the penalty area who unleashes a low shot from the right, but Meyer is down quickly to smother the danger.

67th minute: So close to a second for Osako! Sargent chests down to the Japanese, who shoots from eleven metres out but is denied by a fantastic save from the Regensburg keeper.

89th minute: Regensburg have the ball in the Werder box and there’s a huge scramble as the ball pinballs around in front of Jiri Pavlenka! The ball is eventually cleared by a defender, with every Werder fans heaving a huge sign of relief.

Conclusion: Werder gained a foothold in the first half and then grew into the game, controlling the possession and having the majority of the chances. There were lots of corners and duels, but few clear opportunities for either side, however. Milot Rashica had the only shot on target of the first half in the 26th minute. This all changed after the break though, as a flurry of chances for both teams upped the tempo of the cup clash. Albers went close for the hosts (48’) before Niklas Moisander smashed a header off the upright two minutes later. Yuya Osako opened the scoring in style in the 52nd minute to give Florian Kohfeldt’s team the advantage. After the Japanese narrowly missed getting his second, Regensburg pushed forwards again but the Werder defence were able to keep up their clean sheet record and reach the final four of the DFB-Pokal!