Werder Bremen suffered their sixth consecutive defeat in the Bundesliga on Wednesday evening. The 1-0 defeat to FSV Mainz 05 saw SVW slip down to 14th place in the table, as Adam Szalai scored the only goal of a tight affair in the 16th minute at the wohninvest WESERSTADION. The loss was made even more bitter by Joshua Sargent’s disallowed goal shortly before half time which was ruled out by VAR after Kevin Möhwald was adjudged to have fouled Mainz goalkeeper Robin Zentner in the build-up (44').

Line-up and formation: Head coach Florian Kohfeldt made three changes to the team that started the defeat to Dortmund three days ago. Niclas Füllkrug and Josh Sargent replaced Leonardo Bittencourt (ankle injury) and Yuya Osako up front, while Ludwig Augustinsson came in for the suspended Christian Groß.

Josh Sargent had the ball in the net shortly before the break but VAR ruled it out (nordphoto).

4th minute: Early penalty shout for Werder! Ludwig Augustinsson dribbles into the box and falls under pressure from a defender, but the ref waves away the protests and the Green-Whites have to settle for a corner kick.

16th minute: Goal for Mainz. Karim Onisiwo finds space on the left and advances, before opening up his body to curl in a shot on goal. Jiri Pavlenka gets down brilliantly to save with his feet, but the ball ricochets to Adam Szalai, who has the simplest of tasks to tap into an open net.

27th minute: Milot Rashica wins a free kick on the left and stands over it himself. The Kosovan international strikes it well and beats the wall, but it’s just too high and flies over the bar.

31st minute: A golden opportunity for Niclas Füllkrug! The striker times his run to perfection to beat his man and is through on goal, but directs his shot straight at Zentner in the Mainz goal.

38th minute: Strong save from Jiri Pavlenka! Leandro Barreiro Martins meets a cross into the Werder box with his right foot and his volley is heading into the bottom corner, but for the left glove of SVW’s number one.

44th minute: Disallowed goal for Werder. Theodor Gebre Selassie whips in a great corner that causes absolute chaos in the box as Robin Zentner drops the ball and has it poked out from under him by Kevin Möhwald. Josh Sargent pounces on the loose ball and smashes it home, but VAR rules that Möhwald won the ball illegally and rules it out. Tough luck for the Green-Whites.

Mainz seal an away win 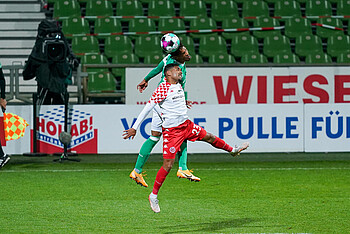 48th minute: Mainz and Adam Szalai both very nearly have their second of the evening. The ball is crossed into the box and the Hungarian controls well with his chest before turning and crashing a fierce attempt off the underside of the crossbar. Pavlenka had no chance!

58th minute: A corner is taken from the right and headed out by the Mainz defence. It falls kindly for Maxi Eggestein who shoots from distance, but his shot goes narrowly wide of the right-hand post.

59th minute: Onisiwo has a free shot in the penalty area after Szalai's pass, but Pavlenka makes a brilliant save.

60th minute: Niclas Füllkrug receives the ball on the right and dribbles forward. He unleashes a low drive that Zentner can only parry, but the angle is too tight for Maxi Eggestein to take advantage of the rebound.

87th minute: Philipp Mwene takes a pass under control on the edge of the Werder box and shapes to shoot from distance. The effort is a good one and beats Pavlenka, but it goes just off target.

90+3rd minute: Substitute Romano Schmid catches a volley sweetly and it flies towards the top corner but goes just over the corner of the net. So close to a late leveller for Werder!

Conclusion: Werder started the game well and showed a lot of energy and drive in the early stages, dominating possession with good passing play in the first quarter of an hour. However, this good play was undone by the ultimately decisive goal for the visitors, as Adam Szalai netted what would be the winning goal after an unfortunate slip from Milos Veljkovic. SVW fought their way back into the game and went close through Niclas Füllkrug’s great chance in the 31st minute. Pavlenka made some strong saves, before Josh Sargent’s goal was harshly ruled out by VAR following a foul in the build-up. The Zerofivers remained strong on the counter and were able to seal a sixth consecutive defeat for Werder.