Post-match reaction to the defeat in Stuttgart

SV Werder Bremen suffered a narrow defeat to VfB Stuttgart on Easter Sunday. “It was our most unnecessary defeat so far,” is how a disappointed Maximilian Eggestein summed up the 1-0 loss. “We definitely deserved more today,” added head coach Florian Kohfeldt. Next up, Werder will need to recover well in time for their rescheduled DFB-Pokal quarterfinal against SSV Jahn Regensburg on Wednesday evening.

WERDER.DE has all the post-match reaction from the team following the loss away at VfB Stuttgart. 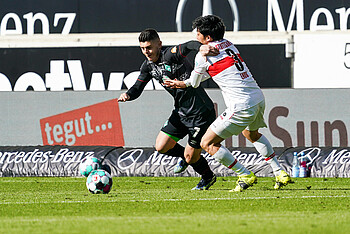 Florian Kohfeldt: “In terms of the game and the goal we conceded, both make this an unnecessary defeat, which we didn’t deserve. We played well and needed to score, but then we were unlucky to concede. It’s too bad, because we invested a lot in the game and played good football. We combined well, we created chances, pressed our opponents and were courageous. The team put on a good show, which I’m pleased to see.”

Romano Schmid: “We need to be frustrated with ourselves today, because we played well. We failed to score goals, and then conceded a very unfortunate goal.”

Maximilian Eggestein: “It was our most unnecessary defeat so far. We had several chances, but didn’t finish them and failed to score. Our team had a lot of energy in attack, and lost due to an unlucky goal. We need to finish our sequences better, which is a conclusion we can draw from today. We weren’t able to turn our efforts into something concrete. We definitely deserved more today.”

Kevin Möhwald: “We shouldn’t have lost today. We had enough opportunities to create chances for ourselves. We lacked that final touch, which we have to acknowledge. We were then unfortunate enough to concede and lost 1-0. The situation leading to the own goal started in attack: Castro broke free from four players, which shouldn’t happen. What happened after was just unlucky.”

Ömer Toprak: “It’s tough to lose like that today. We were up against a good side, put Stuttgart under pressure and allowed them very few chances. We have to build on this and be more clinical with our own chances.”

Ludwig Augustinsson and Werder will be back in action on Wednesday in the DFB-Pokal quarterfinals (Photo: nordphoto).

Florian Kohfeldt: “We are seven points clear of the relegation zone, and don’t need to panic. We need to pick up points still, which we will do. The key will be how we play. We need to perform in every game to a level where we can win, which we more than did today. I think that a point would have been fair today, but I’m also of the opinion that we were closer to a win today than Stuttgart, which makes it all the more unfortunate.”

Romano Schmid: “The situation is the same as it was before the game. We need to give it our all and pick up points. Our opponents below us are getting stronger, because they need to pick up points.”

Ömer Toprak: “We have 30 points and know what our current situation is. It will be close til the end, and we will need to continue picking up points.”

The DFB-Pokal game on Wednesday:

Florian Kohfeldt: “One of our biggest strengths this season is that we are always able to refocus ourselves and play our game. We want to continue like this and are on a good path. We will need to be focused, as we’re up against a strong side on Wednesday. We really want to reach the semi-finals.”

Maximilian Eggestein: “We know what to expect in Regensburg and definitely cannot underestimate them.”

Kevin Möhwald: “Of course we have big things we want to achieve in the Pokal, which is why we need to recover well and be fresh for Wednesday’s game. We will all be fit and ready, in order to reach the next round.”

Ömer Toprak: “It may be a different competition, but we want to win against Regensburg in order to advance to the next round.”