Preview of the Bundesliga clash against Eintracht Frankfurt

SVW coach Florian Kohfeldt summed up his approach to training following last Sunday’s heavy defeat to Hoffenheim in one word: “The appropriate term for this week’s training is ‘realistic’.” However, he did not mean that Werder will be going into the match against Eintracht Frankfurt on Friday evening (20:30 CET) with no hope of picking up points. “I’m fully aware of how tough the challenge awaiting us is,” he stressed at Thursday’s pre-match press conference ahead of the match at the wohninvest WESERSTADION. “But I’ll say it quite clearly. Our goal for Friday night is to pick up points.”

The squad: Ludwig Augustinsson and Patrick Erras will not be available for the game against Eintracht Frankfurt. They should return to team training over the course of next week and will be in contention for a place in the matchday squad from next weekend. All other players are fit and available for Florian Kohfeldt.

Kohfeldt: “We want to bounce back immediately” 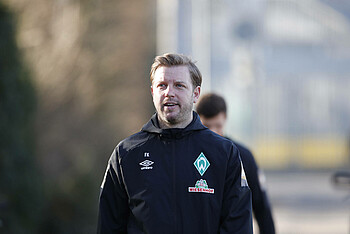 Florian Kohfeldt has only had two sessions to prepare his team for Friday’s game (nordphoto).

The head coach on the game: Florian Kohfeldt is not just looking forward to the game because it was against Frankfurt that he first took charge of Werder. “They play an open style of football that’s very aggressive and they are always looking to push forward. I really enjoy playing against them,” said the 38-year-old. Kohfeldt wants to see the courage with which Werder have approached games against other top sides in the league this season on show again in the Friday night fixture, but with an extra something: “We need to be able to pick up the points that our performance deserves.” Although the humbling in Sinsheim cannot be said to be representative of SVW’s whole season, it has shown how quickly and unexpectedly things can change. “Because of that, Friday evening’s game is very important for us. We want to bounce back immediately after last weekend and show that that was just a one-off,” emphasised Kohfeldt.

The last meeting: In the first meeting this season, Werder met a Frankfurt team who had had a bumpy start to the season. Following Eintracht’s 5-0 loss in Munich the week previously, Adi Hütter's team wanted to show a reaction but were unable to do so against a Werder side who were performing strongly on their travels. The game was goalless at the interval after Kamada’s first half strike was ruled out for offside. The Green-Whites emerged as the better team from the dressing room and opened the scoring through Josh Sargent in the 51st minute. It didn’t take SGE long to respond to this setback however, as André Silva struck a 65th minute equaliser that ensured the points were shared at the Deutsche Bank Park. 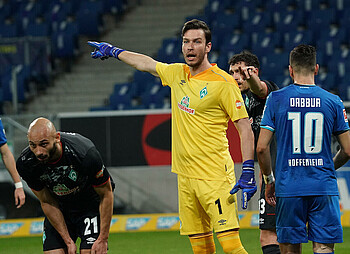 Jiri Pavlenka and the Werder defence will be looking to improve defensively (nordphoto).

Frankfurt on the hunt for UCL qualification: In contrast to when the teams last met on matchday six, Florian Kohfeldt’s team are up against what is probably the league’s most in-form side. Having collected 42 points from 22 games, Eintracht are currently on course to qualify for the Champions League. In addition to this, Adi Hütter’s team have just gotten revenge for their earlier thrashing at the hands of the champions by recording a 2-1 home victory over FC Bayern last weekend, a fifth Bundesliga victory in a row for Frankfurt.

Werder under pressure: Similar to how Frankfurt were in the first meeting this season, SVW are also keen to bounce back after a heavy defeat. Although Florian Kohfeldt’s team sit in 12th position in the table on 23 points, the gap between them and the drop zone is threatening to become thinner. Accordingly, Frank Baumann and Clemens Fritz made it clear during the week that Werder must get back to their best on Friday evening.