“We didn’t offer anything today”

Views on the 4-0 loss to Hoffenheim

None of the Werder players were able to find any positives following the 4-0 defeat to TSG Hoffenheim on Sunday evening and were highly self-critical as they reflected on the game after the final whistle. “We didn’t offer anything today. We brought nothing both in footballing terms and in terms of physicality,” summed up centre-back Ömer Toprak. “As a team, we had a nightmare today,” added head coach Florian Kohfeldt.

Theodor Gebre Selassie: “We lacked all the quality that we have shown over the past few weeks today. We gifted them the first two goals and that meant that the game was out of reach for us straight away. It's something that hasn't happened to us so far this season and it was exactly what Hoffenheim needed. After the break, we conceded a third very quickly and then the game was all but done. We had some decent opportunities in the first half which we had to take advantage of but didn't. It's a clear and deserved defeat.”

Ömer Toprak: “We didn’t offer anything today. We brought nothing both in footballing terms and in terms of physicality. We gave the ball away too easily, didn't win enough duels, and didn't press well. No one can claim to have played well today and as defenders, we’re a part of that of course.”

Florian Kohfeldt: “There are no positives from the game today, that’s quite clear. It's a horrible day for all of us. Individually and as a team, we were way off the pace. The goals we conceded were far too easy, especially the first three, and we simply weren't committed enough. It was a collective failure and I include myself in that. As a team, we had a nightmare today.”

On the next game: 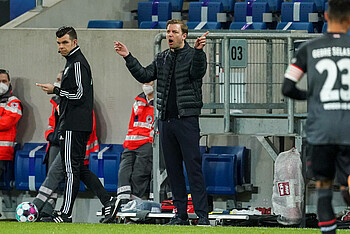 Florian Kohfeldt is expecting a reaction from his team against Frankfurt (nordphoto).

Theodor Gebre Selassie: “Obviously we will analyse tonight's game but we have to put it behind us before the game next Friday. What is very clear is that if we play like we did today, we will not win a game against anyone, no matter who it is in the league.”

Ömer Toprak: “We are angry and disappointed in ourselves. We have to analyse the game and figure out what we have to improve. The most in-form team in the Bundesliga are coming to Bremen on Friday. It's a case of winning our duels, playing better, and most of all showing a positive reaction to today's loss. We know that there are some tough games coming up, but we also know that we can play a lot better than we did today.”

Florian Kohfeldt: “Today was a step backwards, that's for sure. But we have always managed to show a positive reaction to bad performances so far this season, for example against Hertha on the first day and against Union earlier this year. Now what we have to do is repeat that reaction. We are playing a top, top team on Friday. We have to be very careful at this stage even though we are on target in terms of points. We still need to keep picking them up.”