Toprak: “I take the responsibility on myself”

Wednesday’s press conference saw Ömer Toprak cut a self-critical but motivated figure as he sat down to speak to the media. “I slept badly because I was so frustrated,” he recalls of the night after the Hoffenheim defeat. “In an ideal world, I’d love to be playing again tomorrow.” However, Toprak will have to wait for another day before the Green-Whites welcome Eintracht Frankfurt to Bremen on Friday evening (20:30 CET).

On Monday, sporting director Frank Baumann voiced his expectation that the leaders in the squad step up following the 4-0 loss in Sinsheim and in Ömer Toprak, Baumann’s words have hit home. Toprak takes his leadership role at Werder very seriously and was extremely self-critical following Sunday evening’s defeat. “I’m largely responsible for it because I didn’t manage to organise the team well enough,” emphasises the defender, referring to the easy goals that were shipped against TSG. He also came to the defence of Marco Friedl and the rest of the Werder defence: “As a central defender, when I have a bad game, it has a big impact on everyone else game as well.”

Bouncing back against Frankfurt 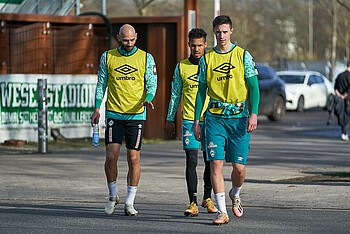 Werder’s defence will be hoping for a better performance on Friday against Frankfurt (nordphoto).

Nevertheless, the 31-year-old is not letting the game affect his mentality. “We know that we still need to pick up more points, but at the same time we’re not doing badly on 23 points,” he says. Setbacks are part of the game and so instead of letting it rattle him, the Werder man is keen to prove that the loss was just a slip-up. “Now is the time to show we can bounce back,” he asserts.

However as Clemens Fritz emphasised in his midweek update, defending against Frankfurt will be a very tough challenge. Ömer Toprak needs no reminding of the quality of Friday’s guests at the wohninvest WESERSTADION: “We know that the most in-form team in the league is coming on Friday. We have to be back at our best and show a completely different side of our game compared to the Hoffenheim match.” Although Toprak and the rest of Florian Kohfeldt’s team will be going into the Bundesliga clash as underdogs, he intends to approach the game with the same principle as always: “Every game is a challenge and it will be no different on Friday.”