Fighting performance rewarded with a point

As expected, it was a tough, hard-fought game against SC Freiburg. Head coach Florian Kohfeldt’s side battled hard throughout the 90 minutes but had to settle with a point at home to the team from Baden-Württemberg. It was a tactical match with no shortage of chances but neither team was able to capitalise on these to break the deadlock. After a difficult opening half hour, the Green-Whites found their footing but were unable to beat Florian Müller in the Freiburg net.

Line-up and formation: Florian Kohfeldt made just one change to Werder’s starting XI compared to the team that started the victory over Greuther Fürth in the DFB-Pokal. Ömer Toprak was rotated back into the line-up for captain Niklas Moisander, while Milot Rashica also started against the Sport-Club. SVW’s head coach had an almost complete squad at his disposal for the Bundesliga clash apart from Patrick Erras. Niclas Füllkrug also returned to the bench for the match at the wohninvest WESERSTADION. 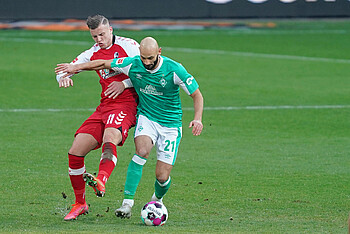 8th minute: Josh Sargent battles to keep hold of the ball before slotting in Ludwig Augustinsson down the left. The Swedish international whips in a good cross but the defence is first to meet it and Florian Müller collects.

12th minute: Jonathan Schmid is first to a loose ball on the edge of the Werder area and catches a volley perfectly that flies just over Jiri Pavlenka’s crossbar. A warning for Werder!

20th minute: Milot Rashica receives the ball and makes himself some space with a clever dummy on the edge of the Freiburg box. His powerful effort is deflected behind for a corner, but it comes to nothing.

28th minute: Ludwig Augustinsson sends an early cross into the area that looks dangerous, but Freiburg’s keeper is quickly out and gathers the ball after initially spilling the catch.

36th minute: Milos Veljkovic rises highest to meet another cross from Augustinsson from close range, but sees his header superbly saved by Müller in the Freiburg net! So close to an opener for the hosts!

38th minute: Milot Rashica is involved again as he beats his man with great movement before firing in a low shot towards the bottom left corner. Florian Müller has a good view of it though and is able to get down quickly to make a smart stop.

42nd minute: Niclas Höfler tries a long-range volley that Pavlenka watches closely, but it whistles just over the frame of the goal. 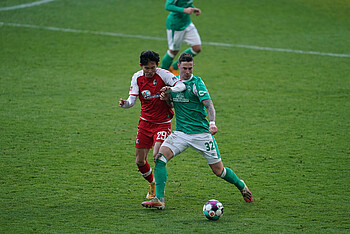 Both sets of attackers were unable to land a sucker punch to win the match (nordphoto).

49th minute: A bright start to the second half from Romano Schmid. The young Austrian controls a low pass well before turning into space to line up an effort from outside the box, but the shot flies high and wide.

55th minute: Vincenzo Grifo, who has had a quiet game up to this point, pops up in the Werder penalty area and collects the ball before striking a shot towards goal. It beats Pavlenka but is just off target and goes wide of the right-hand post.

73rd minute: Höler looks to cross from the left but Marco Friedl charges him down to deflect the ball behind for the visitors first corner of the afternoon, but it comes to nothing.

75th minute: The Green-Whites break at pace with Rashica running at the Freiburg defence, but he lacks support and the counterattack peters out.

77th minute: A golden chance goes begging for the visitors! The ball is whipped into the Werder box and drops perfectly for Niclas Höfler who powers a volley down the middle of Pavlenka’s goal. SVW’s keeper is equal to it but can only parry as far as substitute Nils Peterson, who somehow puts his rebound wide!

81st minute: Freiburg whip the ball across the box but no attackers are there to trouble the Werder defence.

83rd minute: Christian Streich’s team are ramping up the pressure in search of an away win. A first attempt is blocked before Jonathan Schmid collects the rebound and fires in a low shot that forces Pavlenka into a brilliant save down low to his left!

Conclusion: Both sides struggled to get a foothold in the game at the beginning. SC Freiburg had more of the ball throughout the first half hour but were unable to make the possession count. As the match approached half time, SVW pushed forwards in search of an opener and had a great chance through Milos Veljkovic’s saved header. Following the break, the Green-Whites continued to control the game but were unable to find the back of the net. As a result, Florian Kohfeldt’s team recorded their first 0-0 draw of the campaign as the points were shared, just like in the reverse fixture in Freiburg.