A committed performance and some great chances late-on were ultimately not enough for Werder to come away from Mönchengladbach with any points. The Green-Whites were narrowly defeated 1-0 by the Foals in the early game on Tuesday evening, ending the first half of the season with a total of 18 points. Nico Elvedi scored the decisive goal as he glanced a header into Jiri Pavlenka’s net from a free kick in the 66th minute. Head coach Florian Kohfeldt watched a good performance from his side as they created some great opportunities to score. Schmid saw his volley tipped wide by Yann Sommer in the first half, while Rashica struck the inside of the post late on, but SVW were unable to find the back of the net in the end.

Line-up and formation: Head coach Florian Kohfeldt made just one change to the team that beat FC Augsburg at the weekend. Young Austrian Romano Schmid came into the side, replacing Davie Selke as the Green-Whites set up in a flexible 3-5-2 system against the Foals.

A first half with everything except goals 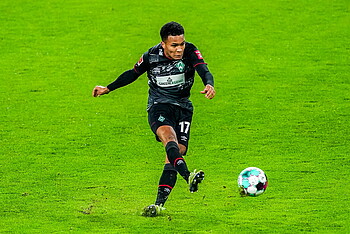 Felix Agu was denied his second Bundesliga goal off the line (nordphoto).

6th minute: Marco Friedl brings down Herrmann on the right-hand side, and the ball is floated into the Werder box from the resulting free-kick. Nico Elvedi finds himself in space, but cannot direct his free header to either side of the goal and Pavlenka saves comfortably.

15th minute: Wolf lays it off to Neuhaus who pings a pass deep into Werder territory. Friedl is on hand to diffuse the danger though, as he sprints over to prevent Wolf from finishing from a promising position.

22nd minute: Referee Martin Petersen shows Jiri Pavlenka a yellow card as the Werder keeper comes rushing off his line to intercept a lofted through ball. Pavlenka leaps to head it but misses the ball completely and catches Hofmann instead. A lucky escape for Werder’s number 1!

26th minute: Great save by Sommer! Theodor Gebre Selassie whips a ball into the Gladbach box, which is only cleared as far as Romano Schmid on the edge of the area. The young Austrian latches onto the ball with a ferocious volley that looks set to fly into the top corner, until Sommer leaps and tips it round the post at full stretch. So close!

37th minute: Now it’s Sommer’s turn to come rushing out, as Sargent knocks it past the Swiss and is brought down outside the box. The referee plays advantage as it rolls to Agu, who attempts to curl it into the far corner but sees his effort cleared off the line by Elvedi.

45th minute: The referee blows for half time with the score goalless after a first half that was anything but boring. Werder had two great chances but the hosts have had the lion’s share of possession. 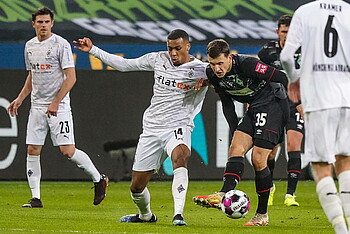 The empty BORUSSIA-PARK saw a committed performance from both sides (nordphoto).

66th minute: Goal for Borussia Mönchengladbach, scored by Nico Elvedi. The hosts win a free kick on the left-hand side, and the ball is whipped into the Werder box. The Swiss defender loses his man and glances a header towards the far post that eludes Jiri Pavlenka and bounces in off the inside of the upright. Advantage Gladbach.

87th minute: How has that not gone in?! Milot Rashica brilliantly turns his man inside the area before firing in a shot to the keeper’s left. The ball comes off the inside of the post and rebounds against Yann Sommer’s back towards the net, but it does not have the legs to make it and the Swiss keeper is able to gather on his goal line.

90th minute: Another great opportunity! Leo Bittencourt cuts inside and aims a shot, but watches his attempt fly inches over the bar. So close again!

90+4 minute: The referee blows for full time, with the hosts coming away with all three points after a narrow victory over the Green-Whites.

Conclusion: A committed performance by Werder gets no reward. Although Florian Kohfeldt’s team showed desire, tactical discipline and created good opportunities, the ball just wouldn’t drop into the net for the Green-Whites. Following the final whistle, the Werder players will be disappointed to be leaving empty-handed, but will take encouragement from the fact that they played so well against one of the top teams in the Bundesliga. Onto next Saturday for a trip to the capital!

Baumann: “We completely understand the decision”

“We were at our best this evening”

27.02.2021 / First Team
Your web browser ist outdated.
The web browser you are using is no longer supported.
Please download one of these free and up to date browsers.
Why should I use an up to date web browser?