Trio could feature against Hoffenheim

Marco Friedl, Ludwig Augustinsson and Milos Veljkovic could possibly feature away to Hoffenheim on Sunday (21/02/21, 18:00 CET), although there are no guarantees. “I’m cautiously optimistic regarding all three players,” said Florian Kohfeldt at the pre-match press conference on Friday.

The trio all trained individually with the fitness coaches on Friday. “They have all had a completely different build-up to the game than the rest of the team,” explained Kohfeldt. “I’m actually quite confident regarding Marco Fried and optimistic about the other two, but I can’t give any guarantees.”

Kohfeldt: “I have full confidence in them“ 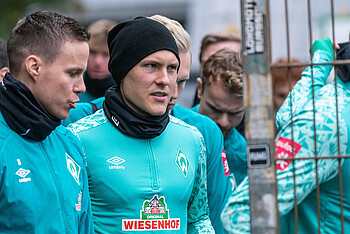 If all three defenders do miss out, Kohfeldt will still have confidence in the possible replacements. “Everyone has shown that they can perform,” he said, referring to Felix Agu, Niklas Moisander and Christian Groß. “It will obviously be quite a few changes if they all cannot play, but I don’t think that’ll happen. Nevertheless, the other lads have played together in the past, so I have full confidence in them.”

One player who definitely won’t be in the squad is Patrick Erras. “He will be out for another week or two,” reported Kohfeldt, who also revealed that Niclas Füllkrug’s chances of starting are a maximum of 50%. “He has trained the whole week, which is really positive. He trained well on Sunday instead of playing and hasn’t missed a minute this week. He probably won’t start because we’ve got a busy schedule coming up. One thing is for sure though – we want to get a player of his quality back involved as soon as possible.”