SV Werder’s director of football and scouting Clemens Fritz sat down for a midweek press conference on Wednesday to discuss the key themes of the week at Osterdeich. Chief among these is the upcoming trip to Sinsheim as Werder take on TSG 1899 Hoffenheim on Sunday (18:00 CET). The first ever Bundesliga encounter between Werder and Hoffenheim is one that the 40-year-old remembers well, as it was one of the highest-scoring games Osterdeich has hosted in recent years. 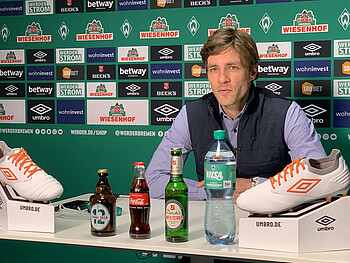 On 27th September 2008, TSG Hoffenheim made the trip north to Bremen for the first time as a Bundesliga club following their promotion from the second tier. Clemens Fritz was still playing for the Green-Whites at that time and remembers the game well. “It’s one of those matches that just sticks in your head!” Werder were leading 4-1 after just half an hour played, but TSG fought back and finally struck an equaliser in the 71st minute following Per Mertesacker’s red card. It was Mesut Özil who was on hand to fire in a winner ten minutes later, ensuring a 5-4 win for SVW. “That was the kind of football we played back then,” recalled Clemens Fritz as he looks back on the goal fest at Osterdeich. “It was a match between two very good teams.”

TSG Hoffenheim are still a very good team, continues Fritz. “We’re up against a side with a lot of individual quality,” emphasised the director of football and scouting ahead of the trip south on Sunday. Nevertheless, he is confident that coach Florian Kohfeldt’s side can maintain their current consistent performances in Baden-Württemberg. “When I think back over our previous performances against Hoffenheim, we’ve always looked good. I have high hopes that we can take the game to them and pick up some points.”