Baumann: “We have to respond to this setback”

Frank Baumann’s disappointment at the heavy defeat against TSG Hoffenheim was clear as SVW’s sporting director sat down to discuss the game at a press conference on Monday. “The bottom line is that it was a very, very poor performance from us, and one that came as a surprise,” said Baumann. However, Werder’s sporting director was keen to emphasise that Friday night’s game will give the Green-Whites the chance to channel their frustration into a positive reaction against Eintracht Frankfurt. “We’re well aware that a very tough opponent is coming to Bremen on Friday, but nevertheless, it’s a chance for us to pick up points.”

No guarantees in the Bundesliga 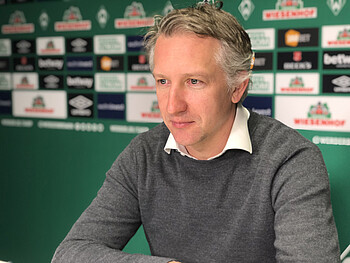 Frank Baumann spoke to the media following the defeat to Hoffenheim (WERDER.DE).

The drop in performance level came as something of a surprise for Baumann, as SV Werder have recently been characterised by consistent showings in the Bundesliga. “It just goes to show that even if things have been going well recently, there’s no guarantee that they will continue to do so indefinitely,” he warned. “You have to take it game by game, maintain alertness, and never let your focus drop, especially defensively.” Werder will not have long to dwell on the defeat and the fact that they failed to make up ground with the rest of the teams in the middle of the table. “We have to pick ourselves up. It’s a short week of training on the agenda and then we welcome a very in-form team to Bremen on Friday night. It goes without saying that we’ll need to play much better for that game,” emphasised the sporting director.

In spite of the result on Sunday, Baumann was optimistic that the Green-Whites will be able to show a different side of themselves in four days against Adi Hütter’s team. “The boys are self-critical enough to know that the performance against Hoffenheim was far below what was expected of them. They are keen to be better on Friday,” he continued, adding from his own experience: “As a Bundesliga player, you don’t want to let a defeat like that weigh you down.”

SVW’s sporting director was keen to press home the point that it is now the responsibility of each and every one of Werder’s players to show an improvement ahead of the next Bundesliga outing. “It doesn’t matter if they’re a younger or older member of the squad, nor if they’re one of the leaders or not.” However, Baumann did emphasise that the more experienced players need to step up after the loss in Sinsheim. “We have shown this season that we’re able to respond to setbacks. That’s what we have to do again now,” he emphasised as he looked ahead to the home game against Frankfurt. Baumann did have one piece of good news, as he reported that there are no new injury concerns ahead of the match on Friday evening.